Working with TV Asahi Corporation, NTT DATA Corporation will generate infographics from tournament data for real-time display on viewers’ television screens during TV Asahi’s live broadcasts of The Open from July 14 to 17.

Working with TV Asahi Corporation, NTT DATA Corporation will generate infographics from tournament data for real-time display on viewers’ television screens during TV Asahi’s live broadcasts of The Open from July 14 to 17.

This initiative applies TV Asahi’s advanced video technology to the concept of the NTT DATA Wall, a digital display built by NTT DATA on the grounds of the venue for The Open. The goal is to provide a new and even more exciting way to watch golf by delivering a variety of data that would be difficult for television viewers to obtain from tournament video alone in a more intuitive, easy-to-understand format, for example by illustrating player performance over the course of the event, and comparing players’ driving distances.

NTT DATA is striving to leverage broad-based expertise in the digital domain to expand business use of increasingly large and complex data sets.

As an Official Patron of The Open, the world’s oldest golf major, NTT DATA offers fans a more immersive and intuitive fan experience by installing the NTT DATA Wall, an enormous digital display measuring 9.6 metres high by 11.2 metres wide, at the tournament venue. By graphically displaying scores and rankings along with real-time data describing play at individual holes, detailed player stats, and other tournament information from social media worldwide on the NTT DATA Wall, the company has built a mechanism to give fans a new level of excitement. As the next step, NTT DATA was searching for a way to deliver the excitement created by this data and digital technology to an even larger audience of golf fans worldwide.

TV Asahi has been broadcasting The Open live for 33 years. As TV Asahi searched to bring the unique feel of the venue to its viewership, its video presentation has evolved over the history of the broadcast, which has communicated the appeal of golf at The Open along with video of tournament play.

This new partnership between the two companies is intended to use data to provide a new and more exciting way to watch golf by combining NTT DATA’s broad-based expertise in the digital domain with TV Asahi’s advanced video technology.

The following infographics*1 are taken from video shown on the NTT DATA Wall, which is installed at tournament venues.

Figure. Performance of the top four players over four days 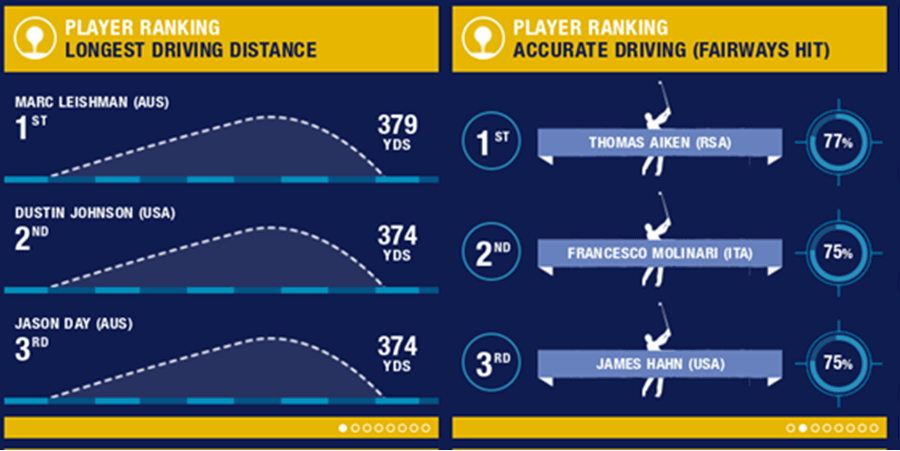 Overview of the initiative

TV Asahi is studying and creating infographics suitable for television broadcast based on visualised tournament data shown on the NTT DATA Wall by NTT DATA. The infographics will be shown in tandem with tournament play in TV Asahi’s live broadcasts of the 2016 The Open from July 14 to 17, 2016.

Data to be included in infographics (tentative)

The initiative will provide the following value to The Open’s television audience:

“I’m grateful to NTT DATA for helping us bring a completely new live broadcast of The Open to our viewers. Going forward, TV Asahi will use data more extensively as it works to bring viewers better coverage of sporting events.”

NTT DATA’s digital business is focused on bringing operational know-how drawn from its extensive track record of successful projects along with expertise in advanced technology to bear in the areas of digital marking, IoT, and analytics. In so doing, the company aims to help customers in the manufacturing, logistics, and service industries achieve business model innovation, particularly through approaches such as omnichannel promotion utilising digital marketing and IoT-driven productivity improvements, and preventive equipment maintenance.

The company will continue to offer support for the digital transformation*2 of customers’ businesses based on its broad-based expertise in the digital domain by working closely with them to plan digital businesses, deploy IT, and launch and manage operations.