“ Augmented Reality(AR) and Virtual Reality(VR) are expected to be used in the sports and entertainment fields in the near future. NTT DATA Group has developed a new training method for baseball players using AR and VR with NTT Laboratories. As this technology is adaptable to all kinds of sports, we encourage professional baseball teams to use it in the near future. ”

In 2017, NTT DATA released a baseball virtual reality (VR) training system. This is the world’s first such system that has been developed with the assistance of a professional baseball team. Since the 2017 season, RAKUTEN BASEBALL, INC. (“Rakuten Baseball” hereafter), which runs a professional baseball team called the Tohoku Rakuten Golden Eagles, has been using this system officially. Under our VR system, a batter with a head-mounted display experiences a perception of a virtual batter’s box and a ball thrown by a specific pitcher. This helps the batter to improve performance results. “Sports First Person Perspective Synthesis Technology” developed by the NTT Media Intelligence Laboratories, enabled the building of this training system. Our virtual reality training system was realized in two steps: first, we synthesized a 3D ballpark space and a pitcher based on all-surrounding-angle video data. Next, Rakuten Baseball’s own pitching data was accurately synthesized onto the 3D frame of the stadium. This recreates the player’s standing position at the home plate, which differs from player to player, and of the consistently accurate orbit of the ball as head position changes during a swing. A professional baseball player can efficiently learn pitcher’s' individual characteristics from watching trajectory, speed, break and location of a pitched ball. There are 143 games during 7 months in the Japanese Baseball League. Processing data collected during a season would normally take long time; however, our system makes it easier for users to create VR contents so that they can constantly update data and use the system during a season. As a result, baseball team can expect improvement of players’ performance. 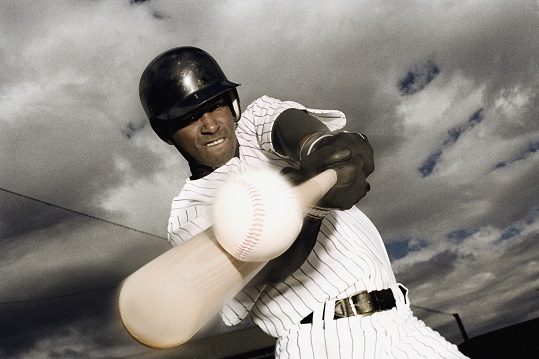