Towards implementing Hadoop/Spark-based next-generation NDB that stores health insurance claims data of all residents in Japan.

Research that aims to visualize medical activities through the nationwide analysis of health insurance claims data has the potential of bringing an extensive reform to future medical services in Japan. The nationwide health insurance claims data form very large data sets with approximately 10 billion records. However, the current database (NDB) that stores health insurance claims data and specific health checkups data, has not been easy for users such as researchers and data analysts to use due to various reasons including architectural issues. This made it difficult to analyze and visualize health insurance claims data.
A project named "Research for Infrastructure Construction of Studies with the Next Generation NDB Data to Create New Evidence " brought together specialists in various fields to build the next-generation-NDB data research platform. This project has succeeded in building a high-performance and scalable system by adopting Apache Hadoop/ Apache Spark (Hadoop/Spark hereafter), which can handle unstructured data in a scalable manner, as the core technology. 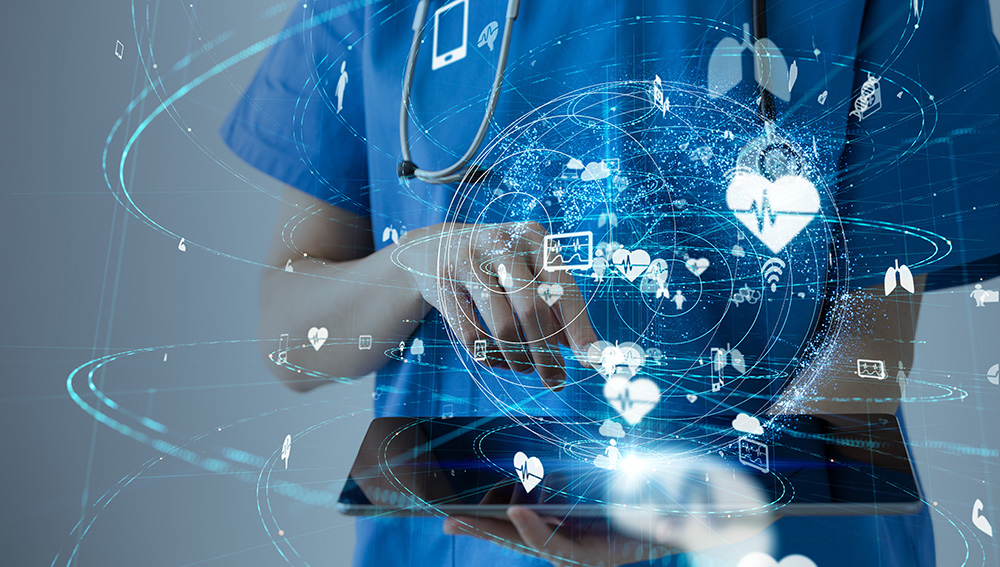 As a research project in FY 2016, the Japan Agency for Medical Research and Development (AMED, hereafter) solicited a research project called "Research for Infrastructure Construction of Studies with the Next Generation NDB Data to Create New Evidence" to solve these problems of current NDB.

Points of the selection

Members of the project included professionals familiar with both medical and informatics fields from Kyoto University Hospital, Nara Medical University, and Graduate School of Medicine and Faculty of Medicine of The University of Tokyo. NTT DATA was selected to build the platform because of their rich track record in Hadoop/Spark platform development.
Professor Tomohiro Kuroda at Kyoto University, the coordinator of the project, says, "Adequate scalability was a key requirement in the public tender. If the system specification can only be enhanced through gradual steps involving server replacement as it was before, the system cannot cope with future increase in data and new data such as nursing care services data. Therefore, scalability with the future in mind is essential."
Another crucial requirement in the public tender was “a framework without vendor lock-in.” “After confirming the feasibility of the next-generation NDB through this project, new tenders will be called to build the production environment. Depending on the technology of a specific vendor tend to bring in disadvantages as a national project. Those disadvantages include unfairness, higher costs caused by lack of price competition, and restrictions in future system modifications,” continued Professor Kuroda.

Thus, the next-generation NDB had to solve the issues of the current NDB while satisfying the requirements as a public tender—flexible scalability and vendor lock-in avoidance. Two open-source software packages, Hadoop and Spark were selected as the core software of the next-generation NDB. Hadoop is capable of accumulating and processing large-scale data sets with distributed computing, and Spark is capable of efficiently processing iterative tasks that use large-scale data. These open-source software are based on scale-out design, thus the system performance can easily be increased by only adding commodity servers without using expensive high-performance servers.

"We had no choice but to use Hadoop as the software framework in order to solve the issues while satisfying the requirements of the public tender. Thus, we looked for a company that has technical competence and know-how on Hadoop/Spark, and found NTT DATA in the center of the community. Their leading worldwide track record of Hadoop-related development and frequent information sharing from the heart of the community proves that NTT DATA understands the core of technology. Also, in addition to the fineness of their work, corporate strength was also an important factor as a national project. In the light of these considerations, we decided that NTT DATA is the best company to handle this project," explains Professor Kuroda about the reasons for selecting Hadoop/Spark and NTT DATA. 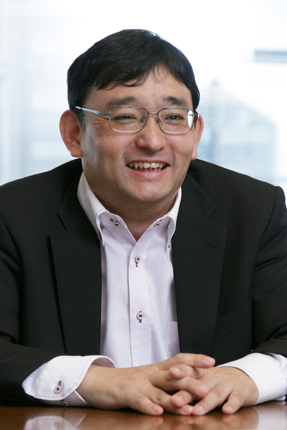 For further utilization and evolution of next-generation NDB

The next-generation NDB has some areas that can be improved while we received both positive and constructive feedback from users regarding improving the next-generation NDB.
"In addition to the fact that all residents are subscribed to the public health insurance system in Japan, prices are set finely. So, it is possible to know the details of the treatments by just looking at the health insurance claims data. You cannot find any other country in the world that has health insurance data in this volume and detail. However, unfortunately, there was no proper mechanism to take advantage of these data which was sleeping behind closed doors. Next-generation NDB is the system to make use of this ‘treasure’. Having established a baseline system on top of the Hadoop/Spark platform in this project, we can clearly see our next steps from here. One of them is to provide a catalog that guides users to understand where and what kind of data are available in the platform. It will attract more users. As a result of this project, we can now create data marts from various angles and expect to be used for various researches. However, having too many data marts to select from makes it difficult to use the system. So, we plan to summarize them in a catalog, and update it after evaluating the demand trends. We have already proposed a mechanism for creating a catalog, and it will come in to light in a new project," explained Professor Kuroda about the future prospects of the next-generation NDB.

Also, Professor Kuroda expressed his expectations regarding NTT DATA saying, “NTT DATA is one of the few important companies that can attract people to accomplish this kind of innovative IT project on the grounds of technical competence, credibility, and track record. I hope NTT DATA will continue to actively provide the government and academic societies with proposals that change the society as a whole.” 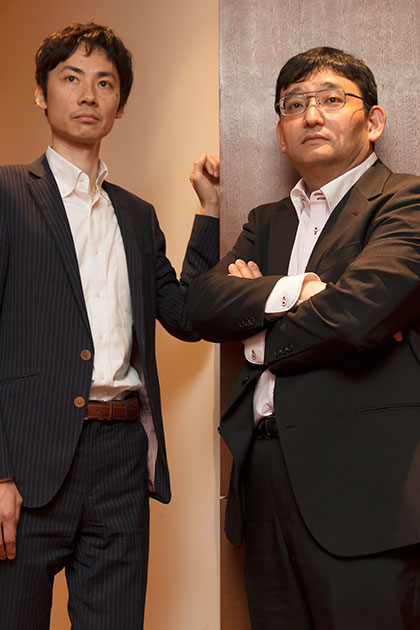 Contents of the project

This project was launched in January 2017 and carried out with the following roles: 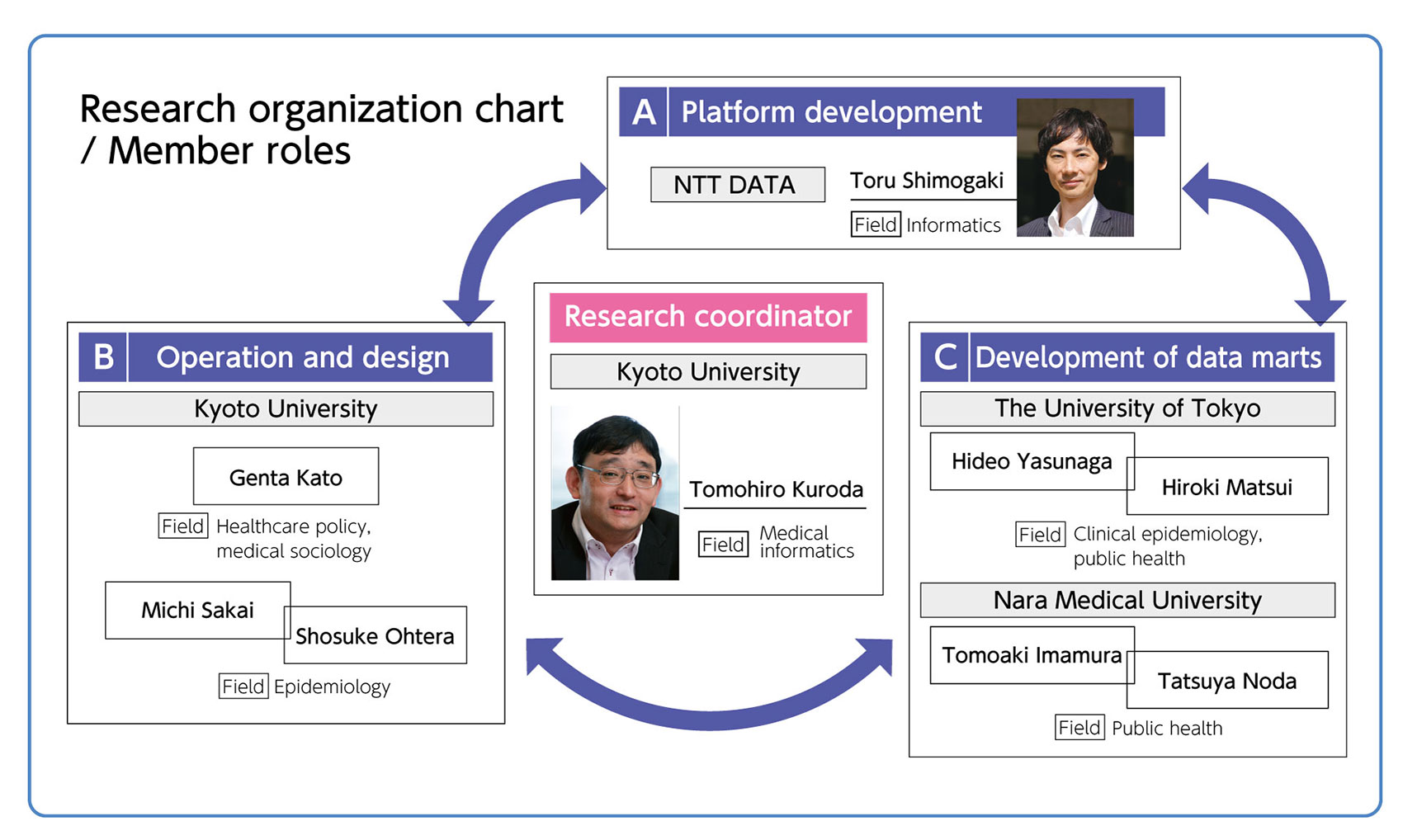 Professor Kuroda who specializes in medical informatics supervised this project. He is responsible for managing digital medical data, utilizing those data in hospital operation and management. He is also familiar with analyzing medical data such as health insurance claims data. His past achievements and experiences largely contributed to the success of this project.

Professor. Kuroda says, "Specialists of different fields shared their goals and progress statuses in time, and this helped me a lot to manage the project. It was literally a dream team of aces. Among everything, I was amazed by the high technical competence of NTT DATA on Hadoop and Spark, their knowledge in the medical field and tasks related to health insurance claims, and their detailed project management skills." 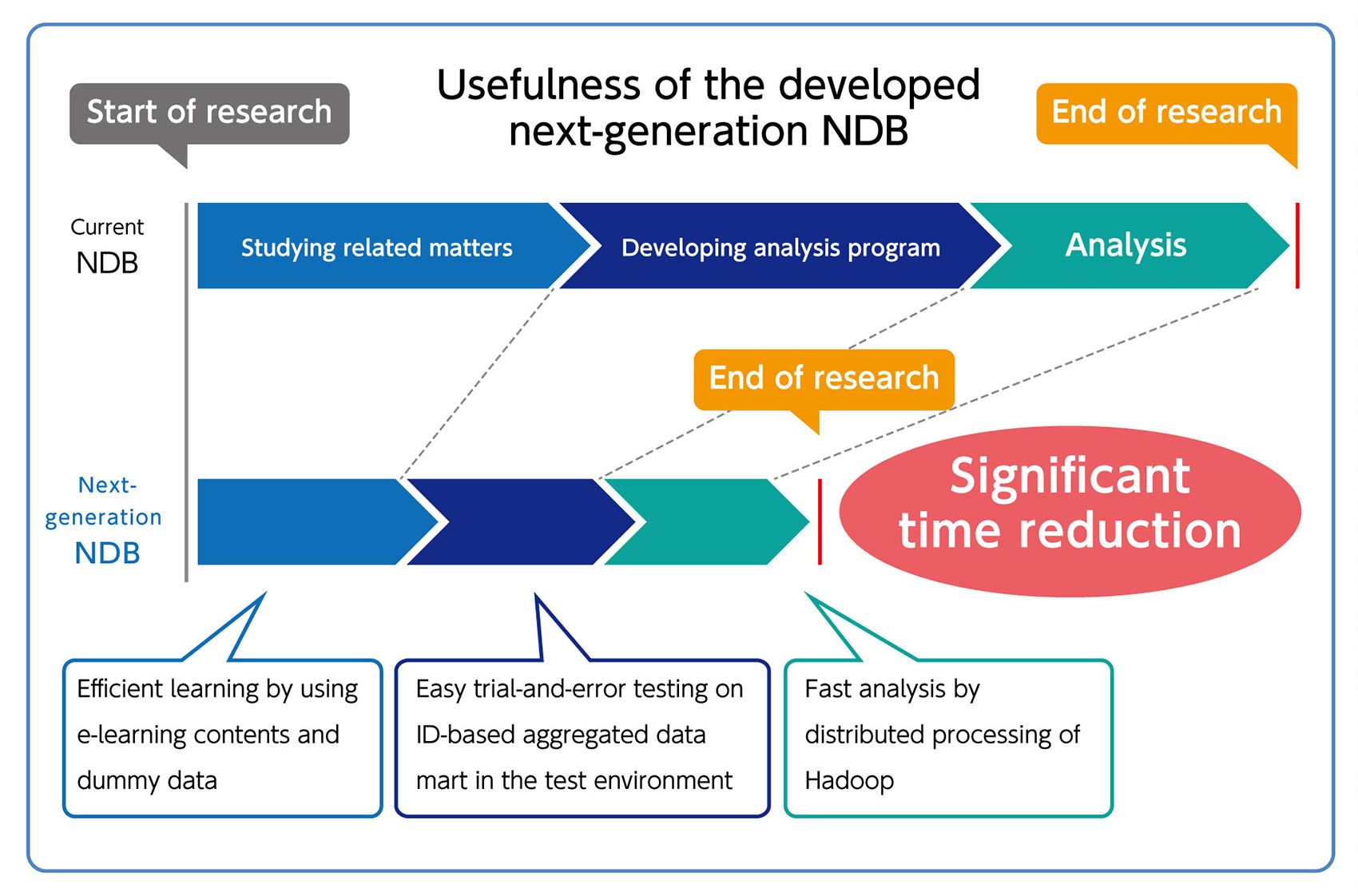 (Service mentioned in this paper)

The next-generation-NDB data research platform is built on top of Hadoop/Spark, which is a scalable cost-efficient parallel distributed processing platform. This system is attracting worldwide attention as a system that promotes the use of large-scale medical data with over 13 billion records. 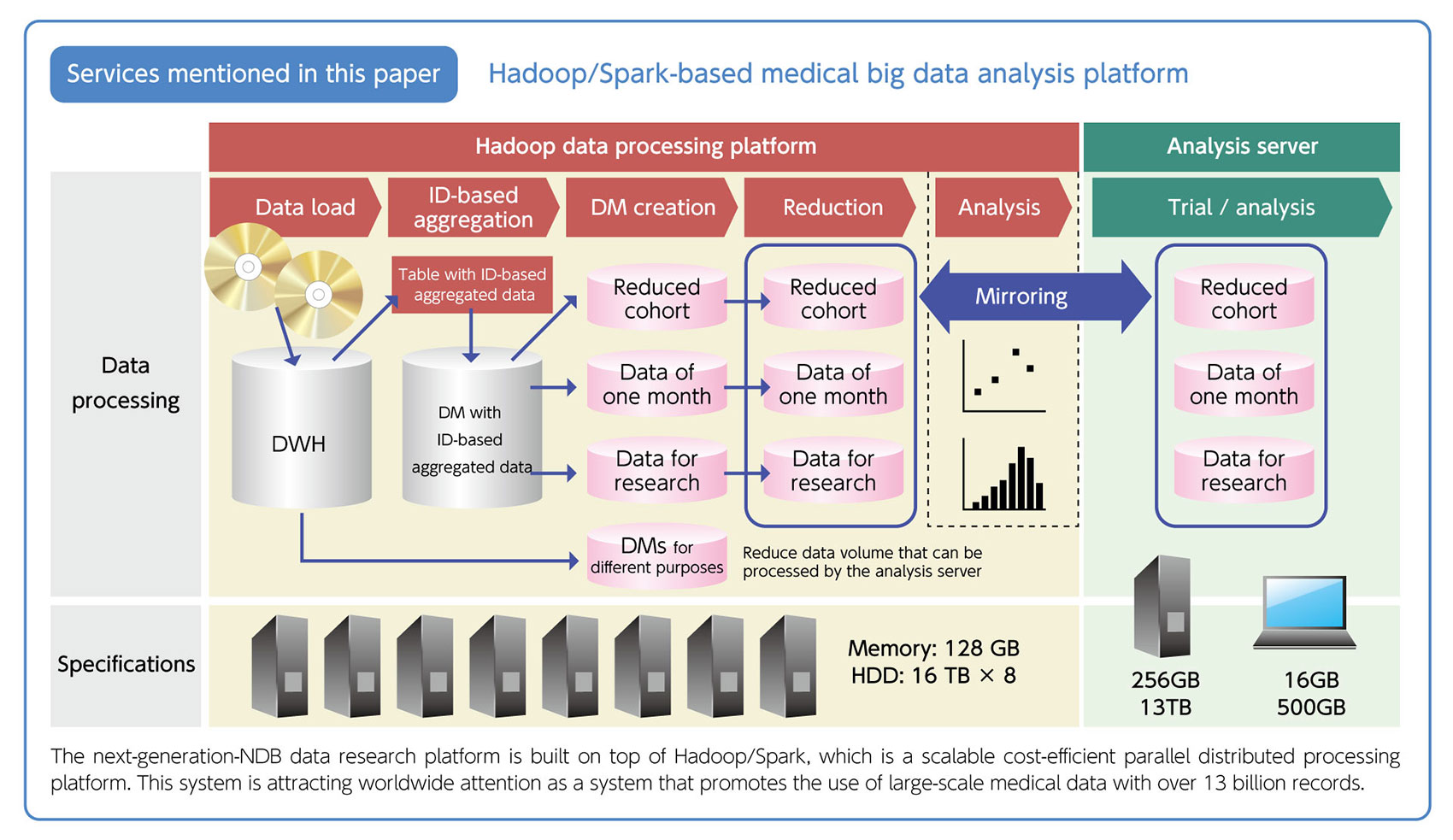 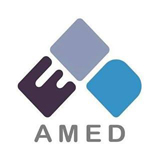 Established with the purpose of conducting consistent research and development in the medical field from basic research to practical application using the capabilities of universities and research institutions. The agency is under the control of the Ministry of Education, Culture, Sports, Science and Technology; the Ministry of Health, Labour and Welfare; the Ministry of Economy, Trade and Industry; and the Cabinet Office.