The physical-digital convergence will broaden in scope increasing the flexible and effective use of technology. This will create new value as limitations in time, space, and ability are removed.

The convergence of physical and digital worlds is accelerating the transformation of companies to a digital form of business. In the past, humans made all business decisions. However, in digital business, machines, things and other business components will also make appropriate decisions. For example, if, in a factory with advanced IoT the delivery of parts are delayed, machines and things in the factory may decide to switch production lines to manufacture different products. Humans would react based on this decision. There is a high probability that existing organizations and systems cannot optimize the benefits of digital business. As a result, not only the company, but the industrial structure itself will probably change.

These changes will also transform the overall social system. As gaps exist in the ability to adapt to rapid changes, new social disparities may arise. A gap between global and in-country rates of change may lead to economic imbalances. Accordingly, it may be necessary to start building a culture through education that tolerates more rapid changes. 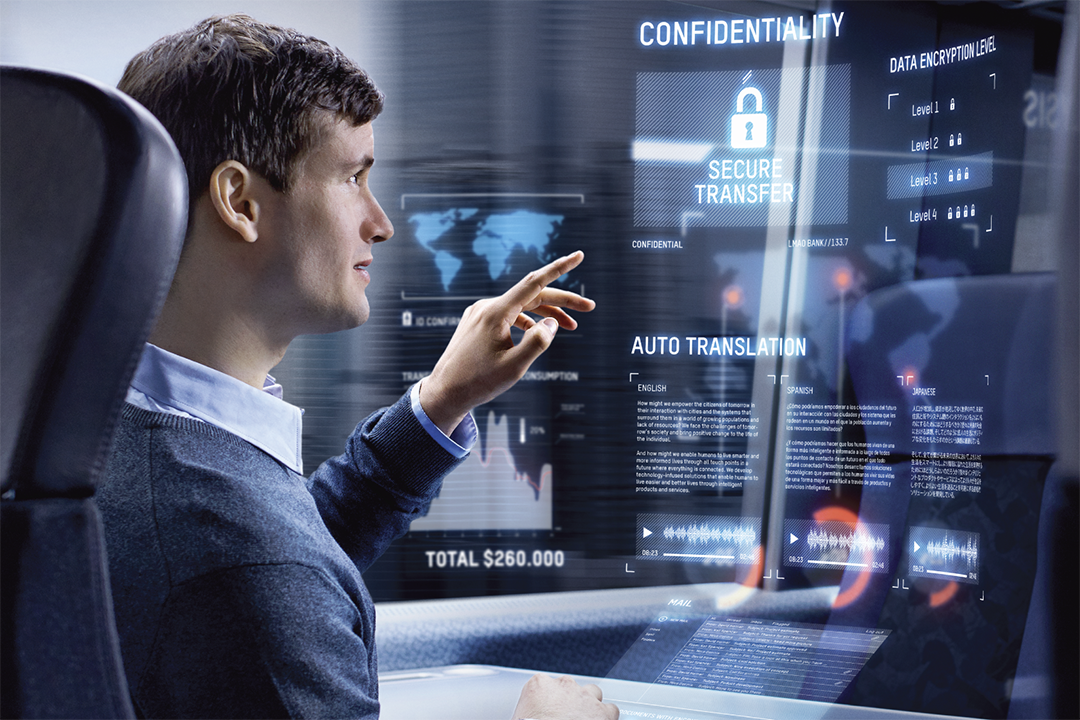 Changes in the Relationship between Machines and Humans

The machine-human relationships are changing. In the past, users interacted with machines according to the requirements of the machines. With intuitive interfaces similar to interactions with other people, humans will increasingly provide machine instructions using postures and facial expressions (image recognition) as well as words (voice recognition). A technology that can identify an individual without examining the face has also recently been developed, and the recognition rate of major voice recognition software now exceeds 90%. Technologies have advanced to a level close to human capacity. Some predict that 50% of web searches will use images and voices by 2020. It is also expected that control of household appliances, reservations for restaurants and orders to e-commerce stores will be achieved by talking naturally to a smart home device. (Even switches and panels will disappear from household appliances). A household communication robot will not only be able to engage in conversations with a user, but also detect emotional changes or symptoms of an illness based on voice patterns, enabling it to mitigate discomfort. A robot which can detect changes in the user’s body conditions immediately and notify healthcare staff will significantly help senior citizens to lead independent lives.

Companies and their customers are starting to use a service called chatbot, which uses text (written characters) and voice to communicate naturally. Applications of chatbot are expanding from travel reservations and shopping to taxi dispatches. Currently users need to call different chatbots that meet their needs, and communication is mostly text-based. However, in the future it is predicted that virtual assistants will converse with users using natural language, while controlling separate chatbots.

Individual authentication will no longer require cards or passwords. Instead, touch and conversation will allow for the detection of finger and voice prints, biometrically authenticating an individual. The days of humans adjusting to machines are being transformed into days where machines are adapting for humans. Autonomous self-driving cars can be considered an example of machines adjusting to humans. With a natural interface, the digital divide, which stems from not knowing how to use machines, will probably also disappear in the future.

The spread of remote healthcare and telecommuting can be regarded as the evidence of the convergence of physical and digital worlds, which has enabled services to overcome the restrictions of time and space to come to humans. Whereas simple image and audio were used to overcome distances in the past, environments artificially created by VR (virtual reality) technology and telepresence will make the experience more realistic. AR (augmented reality) technology, where the real world and digital information are superimposed in real time, and MR (mixed reality) technology, where virtual objects are combined with the real world, are also gradually coming into use as well. Although the need for a head-mounted display was a bottleneck to the spread of VR, smartphones can now easily provide the experience. The main uses of VR are currently entertainment-related such as games. However, education, sports training, simulations, telework and remote support are starting to use VR. AR is also becoming familiar in game apps. Now a wider use of AR is starting to include tourism, events, promotions, construction and interior design. Applications focused on agriculture and fishery are also expected.

Wearable terminals, which measure and record biometric information and track physical activity, can, if worn at all times, capture health conditions. This technology may lead to the early detection of factors leading to illness and/or changes in symptoms, enhancing preventive medicine. The relationship between medical professionals and patients may change. The attitude toward healthcare may also change from seeing a physician when feeling sick to ongoing monitoring and communications.

For example, traffic jams can be eliminated by advanced traffic signal control, ridesharing and the implementation of self-driving cars. Power shortages can be addressed by the implementation of smart grids and demand response systems. In addition, a combination of remote monitoring and preventive maintenance will likely lead to a reduction in maintenance management costs and increased longevity of aging tunnels and bridges. In a smart city, physical infrastructure and digital information will be used in combination to optimize infrastructure.

Automobile manufacturers and IT companies are currently testing self-driving cars on the road, or are soon to reach this milestone. Technological development has preceded rule formulation until now. However, the U.S. Department of Transportation has already published its own guideline for self-driving cars, with the United Nations following to establish international standards. Although it will still take time to establish effective international rules, self-driving cars could be in practical use in the near future. Commercialization of autonomous, self-driving car technology will probably decrease individual ownership of automobiles. Buses will no longer need to run on specific routes according to a schedule, and there will no longer be a distinction between buses, taxis, shared cars or rental cars. The transportation system itself is expected to transition to a more flexible model where vehicles are run on demand. Urban planning will also shift toward self-driving cars and efficient vehicle dispatches.

The expansion of agricultural production is essential to support needed increases in food demand associated with increasing population. It is anticipated that digitization will lead to a stabilized food supply. For example, sensors are already measuring temperatures, humidity and soil conditions. Similarly, drones are spraying fertilizers from the air and monitoring crop growth. In addition, unmanned farm machines are plowing land and harvesting crops. Because the leading cause of poor crop growth is weather, farms are also using mesh weather forecasting data for optimal soil management. Improvement in the accuracy of harvest prediction models also enables the pre-arrangement of storage, transport, sale, and processing of crops, with an expected benefit of reduced wastage. Digitization efforts are also beginning to take place in the fishery and livestock industries.