High-precision biological information, which can be obtained easily and continuously, can be analyzed with AI for the early discovery and prediction of future illnesses. The pursuit of a healthy lifestyle, coupled with technological advances in healthcare, will drive ongoing research into the current issues of an aging society and challenge the constraints of life itself to enhance physical abilities and improve human productivity. 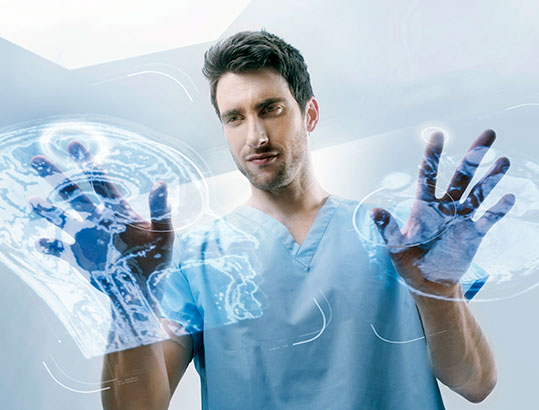 Rapid advances continue to be made in a broad range of personal biometric devices. For example, with the cost of genetic analysis continuing to decrease, we are about to have human genome analysis available for $100. In addition, a portable sequencer has also been developed. As a result, it is likely that health management using genetic information will be of increasing importance in the future. The development of devices that can easily acquire biometric information and the popularization of smartphones have made health management part of daily life. Sensors for smartphones that can measure heart rate, blood pressure and blood oxygen level, as well as ultrasonic diagnostic imaging devices that connect to smartphones are in development. Smart watches have also allowed for the prediction of heart rate and sleep apnea syndrome. Additionally, a wristband has emerged that can measure electrocardiographic values. Having been approved by the FDA, this device can detect atrial fibrillation.

Another prototype that measures blood sugar level and looks like a contact lens is also in the pipeline. Because tears contain a variety of active substances, this device has the potential to detect multiple illnesses such as glaucoma, liver diseases and cancer. The emergence of these personal devices changes medical and healthcare from a service that is offered intermittently at limited locations, to something that is delivered continuously in the user’s own environment. Physical monitoring on a regular basis is becoming the norm, rather than examinations after the onset of symptoms and annual medical visits. By detecting physical changes as early as possible, countermeasures can be initiated prior to the onset of an illness, dramatically improving prevention.

Depression is predicted to be the most prevalent disease that negatively impacts healthy life by the year 20302 . This is an unavoidable issue associated with the extension of healthy life expectancy. In addition, the impact of dementia on society and people’s daily life is horrific, as it is a factor for increasing the number of lost people, frauds and traffic accidents. Medical costs incurred from dementia in the world are predicted to increase from $818 billion dollars in 2015 to more than $2 trillion3 in 2030, placing an added priority on this issue. Although the ultimate cure for dementia is not yet developed, the progression of symptoms can be delayed. That is why it is important to detect the illness early and start countermeasures as soon as possible.

To diagnose depression and other mental diseases including dementia early, it is important to identify changes in specific biometric information and in daily behavior. A continuous approach is required for effective treatment. To support this, IT-based diagnosis and treatments are being developed. Smartphone apps that infer depression and dementia based on voice are already on the market, reducing barriers to use and raising expectations for earlier detection. Besides detection, chatbots that perform counseling and cognitive science-based games that can treat attention deficit hyperactivity disorder (ADHD) and depression are also in progress. Establishment of such technologies will allow people with potential mental illness to more easily go for treatment, with its effects exceeding those of traditional treatment. For dementia, a service is being developed that detects symptoms based on changes in walking speed as measured by a smartphone. A virtual reality (VR) technology is also being developed to detect mild cognitive impairment. In the application, a patient goes shopping in a virtual store where decision-making, calculation ability and many other cognitive functions are required. As applications of digital technology for prevention and treatment of illnesses continue, physicians may one day be prescribing an app or VR content for patients.

The possibility is high that the development of the technologies summarized will enable early detection for a variety of illnesses and the monitoring of day-to-day treatment. However, depending on the illness, the earlier detection and its accuracy and treatment will probably not be sufficient. The missing factor is the lack of long-term data. For early detection, data for the normal condition is also required as well as data after the onset of symptoms. Because the normal range of biometric values and effective treatment differ from patient to patient, huge amounts of data are required to achieve a prevention and treatment plan that is optimal for an individual. For example, multiple components intermingle for the progression of diabetes, depression and other diseases in which lifestyle is a major factor. To detect a disease with high accuracy prior to the onset of symptoms, the factors need to be specified to improve the analysis ability of AI in addition to the accumulation of data. To achieve this, efforts are underway to track health conditions over long periods of time. For instance, Project Baseline4 interactively and continuously accumulates a variety of information on 10,000 people, including healthy individuals. The information being gathered includes genetic information and blood test results; images from radiographic testing; heart rate, electrodermal activity, and other biometric information; hours of sleep, amount of exercise, diet and other life records. This project could elucidate the process of changes in health conditions, including what kinds of genes and factors lead to a disease, increasing the possibility for the achievement of precision medicine.

The Improvement of Physical Abilities

What lies beyond the achievement of the ultimate prevention and treatment of disease? When worries about illness disappear, the desire to enhance health and physical abilities will likely become paramount. Recent technological developments are making such enhancements a possibility. For example, contact lenses that shape and temporarily correct the cornea when worn at bedtime, and which permit the user to live without lenses the following day, have already been commercialized. Devices such as this, which improve physical functions without surgery, will likely be a major focus in the near future.

Also gaining popularity in recent years is brainwave training called neurofeedback. This training gives visual feedback directly to the brain when the targeted action has been achieved. The user only needs to consciously move toward the desired brainwave condition. Although this training has been used before for the treatment of autism, depression and other mental conditions, in recent years it is beginning to be used for the mental and physical training of athletes, as well as in the enhancement of other human abilities such as memory and language learning.

Many parts of the brain have yet to be explored. The Human Brain Project and other efforts to reveal the brain’s functions will further enhance human abilities. In addition, with the application of brain information as the focal point in healthcare, we will likely challenge and overcome the inherent limitations of life. Technologies for the prevention of aging and rejuvenation previously thought of as only a pipe dream may yet come true. If people can work and live for long periods of time with higher abilities, the negative impact associated with an aging society will be a thing of the past.