The natural convergence of the physical and digital world is near. Ubiquitous artificial intelligence will impact people's thoughts, behaviors, relationships and more, prompting the reexamination of societal rules and norms.

Changes in the Retail Industry

Global ecommerce is expected to grow at the rate of about 19.4% per year (CAGR)1 between 2016 and 2020. The ecommerce share of retail sales is estimated to have exceeded 10% in 20172. While traditional retailers are joining ecommerce and closing brick and mortar (B&M) stores, a number of ecommerce companies have also built new physical store locations. Retailers are being responsive to the behavior of consumers, who go back and forth freely between digital and physical channels.

Meanwhile, physical stores have also changed. The growth of ecommerce has altered the role of B&M stores, which now not only sell goods but act as showrooms and distribution bases. Most importantly, stores have become a place to observe customer behavior. In contrast, some ecommerce companies use physical locations to deliver orders directly to customers’ homes.

Physical stores are now integrated with digital technology and experimenting with advanced techniques. Some recent trials have included store guidance by robot, product promotion via interaction between the shelf and a customer’s smartphone and behavior tracking using cameras and sensors. In some cases, AI is used to provide hyper-personalization service. Experiments with a cashier-less store have also begun. In short, B&M stores in the digital era provide vastly different value from that of traditional stores. 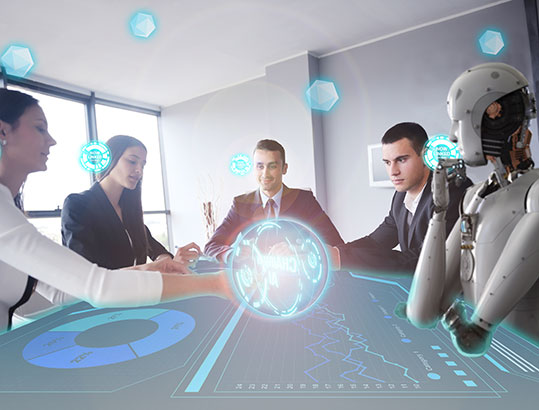 Moving Toward a Cashless Society

Cashless payments support retailers in a digital era. From 2014 to 2015, global cashless payments grew 11.2%. The average compound annual growth rate (CAGR) of cashless payments is expected to reach 10.9% between 2015 and 20203 . Sweden, where cash payment has declined to as little as 1%, is considered to be the closest to a cashless society. Many stores there do not even accept cash. At the same time, cash payments at storefronts in the country have decreased to about 20% of sales. The cashless trend is even taking place in developing countries, where many people do not have bank accounts or credit cards. This is because mobile payments provided by cellular phone companies in locations such as Africa make this type of transaction possible. In addition, cashless payments provided by ecommerce companies and social media companies have also become available at physical stores. 3 https://www.worldpaymentsreport.com/#non-cash-payments-content

AI is advancing the digitalization of face-to-face communication. Of particular interest to consumers is the smart speaker, equipped with a virtual assistant capable of answering simple questions by voice, managing schedules, playing music, operating home appliances and facilitating shopping. The penetration rate of smart speaker interfaces is expected to reach 16%4 in the United States and is likely to grow more rapidly in the future. The results of a recent study concluded that the longer a user owned a smart speaker the more it was used, indicating that it influences behavior patterns. The virtual assistant function is now also widely equipped on smartphones, wearable devices, home appliances and automobiles. In the future, it might be possible for a smart speaker to buy things via another smart speaker with an artificial voice. With the smart speaker, AI has the potential of permeating our social life.

4 Regarding the innovator theory proposed by Everett M. Rogers, Geoffrey A. Moore argued that in high-tech products, there was a big chasm between the early adopters and the early majority (penetration rate of 16%).

AI is being accepted in many aspects of our lives. However, users’ decisions are at risk of being influenced by options suggested by AI. In fact, in a life surrounded by AI, users could be manipulated by it. To make good use of AI while avoiding such biased decision making, it may become necessary to foster the human ability to think and make decisions. For children, it may be even more important to provide them with emotional and ethical education as well as interpersonal communication skills. This is particularly true given that AI that has learned biased data may become a threat to humans. To enable AI to develop good judgment similar to that of humans, it must be allowed to learn social norms.

The relationship between humans and machines will change with AI-equipped machines acting autonomously. Some labor will be performed solely by machines, necessitating a review of laws and systems, which assume human operation and labor. Although it is important to protect human labor, it is also essential to prevent social restrictions from becoming a hindrance to innovations. If the substitution of human labor by machines becomes prevalent, common practices may have to be reexamined, including the eight-hour workday and the introduction of a basic income.

Smartphones are shifting from type input to voice or image for search functions, and speech recognition technology already has an accuracy close to that of humans. In addition, smart speakers are now common in homes. In fact, voice might soon replace the keyboard as the most common form of data entry and smart speakers may displace household personal computers. Moreover, the virtual assistant function of smart speakers is changing computers from a tangible box to something intangible.

Further development of AI might even render instruction via voice or image unnecessary. For example, AI could proactively transmit information based on the user’s expression, vital data measured by a wearable device and the user’s pattern of behavior. AI might independently select and set the environmental conditions, or react to a user’s responses by adjusting settings. In environments such as factories and hospital operating rooms, where users cannot readily use hands, smart glasses or aerial displays may be adopted as a more useful interface. Security numbers and passcodes for personal identification will likely be replaced by biometrics using face, fingerprints, iris and voiceprints. Biometrics can also be combined with user behavior patterns for natural authentication without the user’s conscious participation. As a result, the digital divide stemming from the inability to use a keyboard will be eliminated.

Since AI will be used in households, hospitals, companies and public organizations, a review of societal systems and rules will be necessary for it to be integrated into society. For example, when AI with machine learning has an accident as a result of functions it has acquired on its own or from other AIs, who is legally liable? This and many other issues must be resolved. On the other hand, social norms and customs are difficult to control, and it takes time for changes to permeate humanity. If people harbor a negative concept that AI will rob them of jobs, resistance might elongate the time for changes to occur. Through continuing education as well a review of systems and rules, efforts must be made to prevent alienation and the creation of a new AI divide.