To operationalize service chains with IT, hardware must permeate operations in areas never thought possible. Hardware combined with AI acquires the capability to understand complex surroundings and undertake dexterous operations. As a result, evolved hardware with extensive use of IT is expected to revolutionize service operations.

Businesses powered by IT continue to grow in a flexible and rapid fashion due to the nature of software. However, this growth is limited as long as physical tasks that support its growth depend on manual labor. To overcome this limitation, robots combined with AI are taking a role.

One example of this is the advent of the delivery robot, which physically delivers products ordered online to a customer location. Given accurate eyesight by the AI, the robot can now observe road signs and traffic signals while safely avoiding pedestrians and surrounding obstacles. Additionally, the AI learns huge amounts of behavioral data collected by simulation and uploads it to the robot. This has made it possible for the robot to move its arms like a human, which has previously been difficult to achieve. This acquisition of dexterity can support more elaborate assembly tasks using tools, greatly expanding the scope of applications for robots.

The use of less expensive parts has also contributed to the emergence of a robot with softer joints, although with a somewhat lower accuracy of movement. A robot made with soft material is safer for the surroundings. By changing its shape according to the environment, we can also expect robots to work at locations where it has traditionally been difficult to use, such as a disaster site.

Robots that combine soft material, AI-assisted eyesight and that mimic human movement would be able to perform very, complex tasks. The day may soon come when such a robot is available at low cost. These robots will act as a new interface between IT services and the physical world, supporting the expansion of service areas. 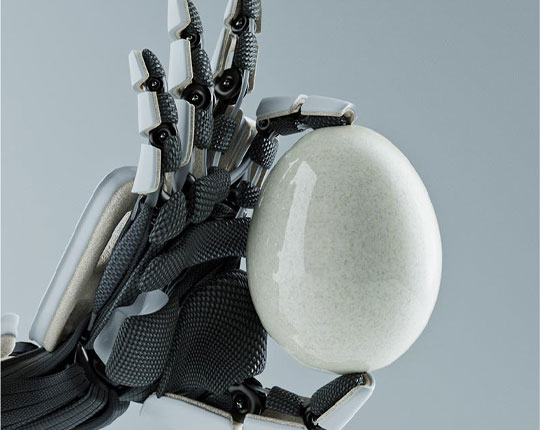