Transform your Business and Productivity 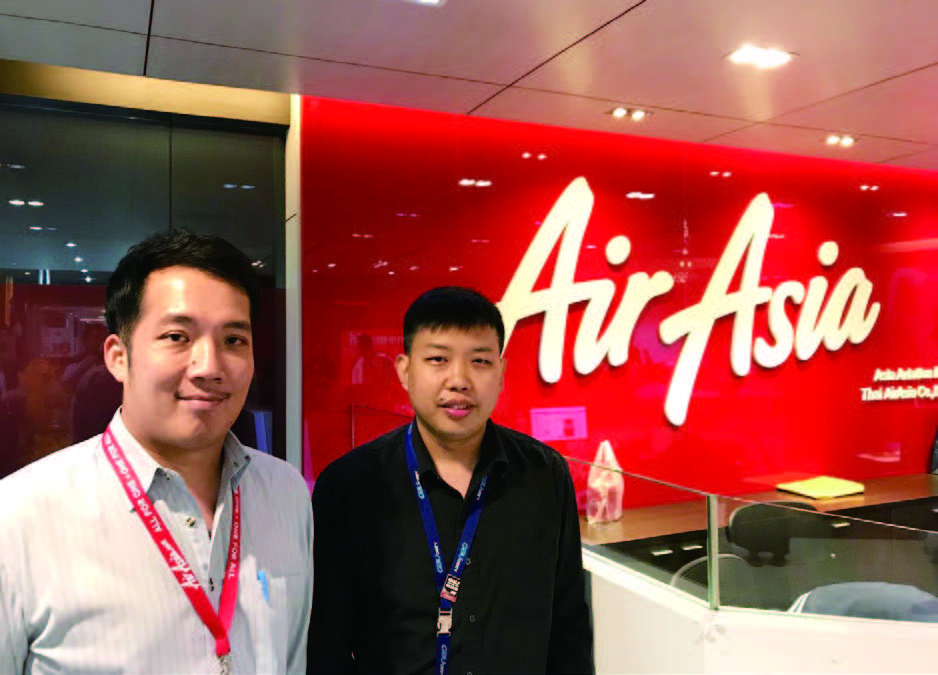 LCC (Low Cost Carrier) created a new market with a business model different from that of major airlines. As the first LCC in Thailand, Thai AirAsia is one of AirAsia Group companies headquartered in Malaysia and positions itself as an ASEAN airline, operating international flights to major Asian countries as well as domestic flights from its 6 airport hubs at Don Mueang Airport, Chiang Mai Airport, U-tapao Airport, Phuket Airport, Krabi Airport and Chiang Rai Airport in Thailand. Since its establishment in 2003, they have steadily expanded its business by increasing number of destinations it operates.

However, the impact of the increase in fuel oil costs caused by the intermittent rise in crude oil prices on the business is not small, and continuous cost reduction is an essential eff ort to maintain superiority of its services as LCC. As part of this effort, the ICT department introduced intra-mart, which is mainly used for in-house workflow operations such as travel expense adjustment. In addition to a significant reduction in paper forms, they achieved system that enables the company to flexibly and quickly correspond to new creation and changed approval processes as a result of organizational changes, resulting in a significant reduction in both outsourcing costs and work time.

Intra-mart is actually not the first one for Thai AirAsia to use workflow. For about 3 years from 2016 to 2018, they used to process various application approvals such as expense adjustment and purchasing operation using workflow function inherent other system that had been introduced previously. However, in a rapidly changing business environment, in order to survive fierce competition from competitors, changes in internal organizations and rules were made very frequently, and as a result, not only a change in approval routes but also several fundamental workflow changes associated with a drastic review of operation process occurred in parallel.

As for the problems with the workflow at the time, Mr. Jirat, a systems specialist in the ICT department said, "Due to the specifications of the system, it was difficult for us to create new ones or change them, and it was necessary to outsource to developers each time, which, not to mention the cost, took a lot of time." In fact, a simple change could have taken nearly a month to make it available, and complex and large new creations could have taken anywhere from six months to a year. In addition, application approval during the work period had to be substituted by the processing of paper forms, and the company was flooded with paper even though the system was introduced.

Another barrier for Thai AirAsia to fully utilize the existing system is its price structure. The company caters to 6,000 people, including pilots, flight attendants and airport employees, as well as back-office employees who fully use workflows in their daily operations. Before the introduction of intra-mart, the system was charged on a per-user basis, so the huge cost was one of the factors that prevented the promotion of corporate use. 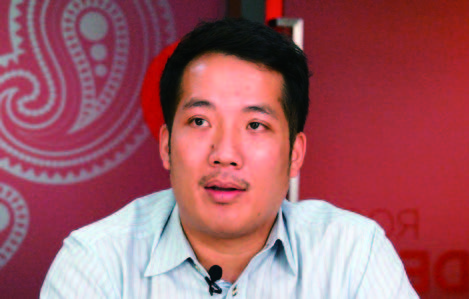 Full-scale examination to replace the system at that time started in December, 2017. There were three key points in the selection process. The first is the ease with which workflows can be created and modified, the second is the pricing structure that enables enterprise-wide use, and the last is smooth implementation and construction. Thai AirAsia did a comparative study and finally narrowed it down to three companies. One of them was intra-mart.

"Honestly, I've never heard of it" said Mr. Pakpom, a project coordinator at the ICT department, who was introduced for the first time by NTT DATA (Thailand), which sells intra-marts in Thailand. "Ability of intra-mart to easily create workflow processes from scratch with drag and drop was outstanding compared to other products" explained the decisive factor to introduce.

As for pricing, while the other two companies were charging user basis as previous system, only intra-mart offered a license system that has no limit on the number of users by charging for the CPU of the AP server to install. Of course, it is not possible to make a simple comparison, but as a result of the consideration based on the assumption that the number of users with different usage and frequency will continue to increase in the future, also in terms of price structure, superiority of intra-mart was recognized.

While there was not much difference between the products when it came to installation and construction, "We highly appreciate the kind and generous support system of NTT DATA (Thailand)" said Mr. Pakpom.

After several months of consideration, they decided to adopt intra-mart, and in December 2018, the ICT department began full-scale operation of workflow.


Operation of Thai AirAsia using intra-mart workflow covers everything from travel expense adjustment called eDTR(electric Duty Travel Request) and using VPN to applying for purchases. Although only seven months have passed since its introduction, it has already produced the following three obvious effects. 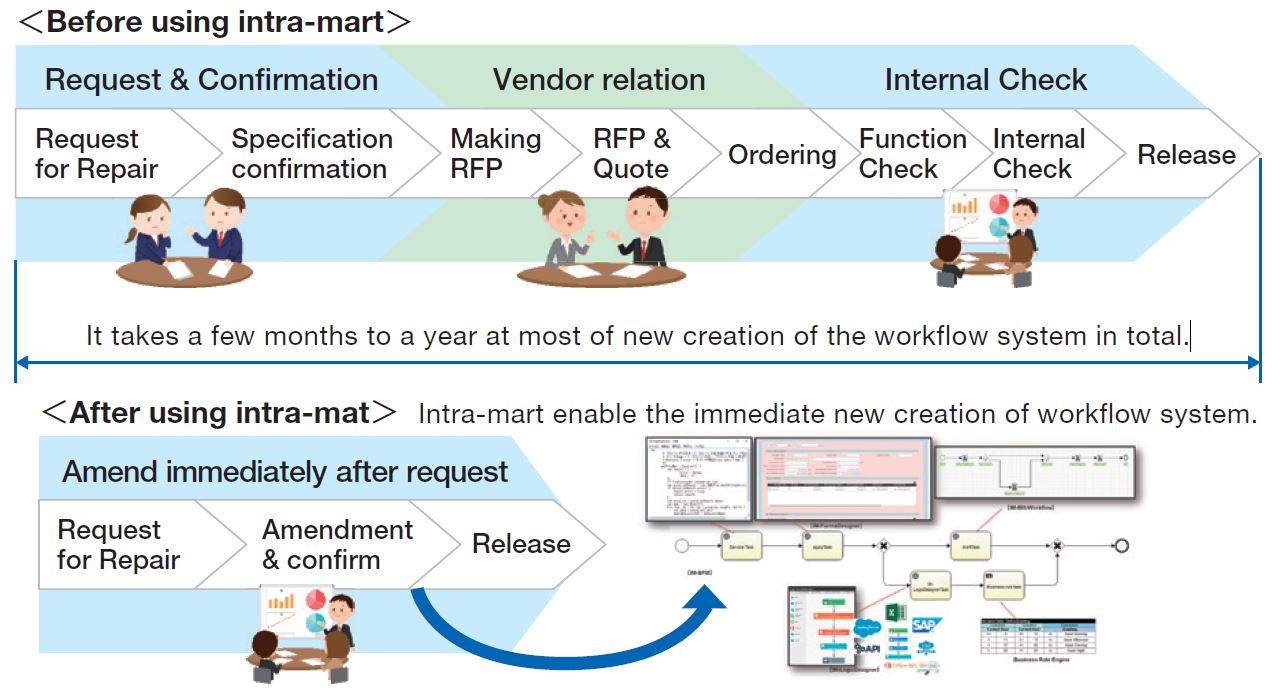 First and foremost, time. They use "IM-Forma Designer" that allows users to create screen intuitively on the browser and set them as application screen. In addition to simple changes such as existing approval routes, new operation processes and workflow screen creation associated with it have been completely developed in-house.

As a result, the time required for outsourcing (from specification propagation to actual operation) to developers has been reduced, and achieved system which changes and new creation can be made flexibly and quickly in-house based on requests identified through direct communication with in-house users. We have succeeded in greatly reducing the time. "The work that used to take one month now takes one week, and the work that used to take six months to one year now takes only about two months. Therefore we can start using it in very short term," Mr.Jirat emphasized the effect.

In addition, the cost of outsourcing was reduced by 80% compared to the cost of using the conventional system, and this also had a significant effect. The company also succeeded in reducing paper form by 60%. "It reduced the risk of physical loss and freed from having a place to store the original forms" (Mr. Jirat). Because applications and approvals can be made from outside the office, the operation itself became much faster, which has been received good reputation by inhouse users.

The business environment surrounding the airline industry is far from optimistic, as competition intensifies due to the entry of major airlines, LCC, and new airlines, as well as personnel shortages and rising labor and fuel costs. Under these circumstances, it is said that "Cost reduction is one of the issues that must be kept in mind at all times" and the ICT department has an important role to play in contributing through the utilization of the system.

"We will steadily expand the use of intra-mart throughout the company. The reduction in paper and outsourcing costs and also the resulting time savings will definitely contribute to LCC competitiveness.” (Mr. Jirat). In fact, it already plans to use it in other departments, such as marketing and legal. "The marketing department carries out a wide variety of marketing activities, both large and small, and has a lot of applying operation associated with them. The use of intra-mart is highly effective in improving operational efficiency and reducing cost." Mr. Pakpom anticipated.


In addition to intra-mart, two other products from Thai and Japanese vendors were candidates for comparison consideration, but only intra-mart off ered a license system that has no limit on the number of users. In addition, through training and workshops were at the pre-sales stage, we were able to demonstrate that it was easy for customers to use intra-mart system themselves, which led to this adoption.