Tokio Marine & Nichido Fire Insurance Co., Ltd. (Hereinafter “Tokio Marine & Nichido”）has carried out a Proof of Concept (PoC) applying blockchain technology to marine cargo insurance claims under the cooperation of NTT DATA Corporation (Hereinafter “NTT DATA”) from November 2017 to August 2018.
We were able to confirm the various benefits of blockchain such as dramatically accelerating insurance payment process through this pioneering initiative across 8 countries on a global scale. The key to success of this PoC was the close partnership between the two companies.

Introduction background and issues
Why use blockchain for marine cargo insurance?

Insurance is a system born from the spirit of mutual assistance for which an insured equally pays a certain amount of premium corresponding to the probability of accident occurrence to help each other in preparation of any accidents or disasters. Insurance is also familiar to us in our daily life. Tokio Marine & Nichido, a leading non-life insurance company, is focusing on providing safety and security to customers in its core insurance business while placing customer trust at the base of all its business activities.
Tokio Marine & Nichido’s corporate philosophy is to contribute to an affluent and comfortable social life and economic development. To achieve this goal, the company makes constant efforts and has actively proceeded in leveraging latest digital technologies for their operations and services. One of the achievements was the PoC of blockchain technology applied to marine cargo insurance claims conducted together with NTT DATA from October 31, 2017 to August 2018. This PoC directly involving overseas operation of insurance payment was Japan’s first case and globally a pioneering initiative as well. 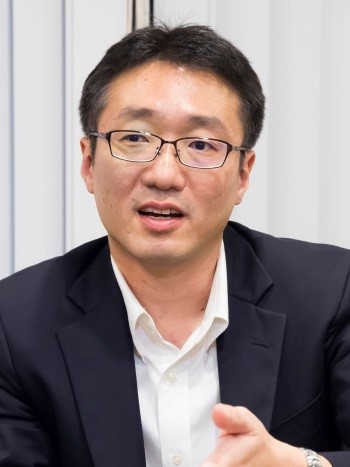 As the background of this PoC, there is a large volume of paper-based documents required for marine cargo insurance, especially when a cargo is found damaged abroad, and its process has not much been digitized, As for marine cargo insurance claims, a contracted insurer is not necessarily in charge of the insurance payment procedures. Especially in overseas, overseas claims settling agents affiliated with the insurer undertake the procedures of insurance payment so that the insured (importer) can complete the procedures from damage notification to receipt of insurance payment at the site. Normally, when overseas claims settling agents go through the insurance payment procedure, they must collect necessary claims documents such as damage report or pictures of damaged cargo and related trading documents including invoice and Insurance Policy (I/P) in paper form or PDF files. In addition, settling agents need to confirm the insurance coverage with the insurer by email and share the status of loss of or damage to the cargo with surveyors.
Mr. Takayuki Itabashi, Deputy General Manager of Commercial Lines Claims Department and Head of Global Cargo Claims Group 2 in Tokio Marine & Nichido, described, "In such a situation, it is a key challenge in achieving a prompt insurance payment, whether claims settling agents can promptly and accurately collect all the trading documents and latest I/P related to the claim existing all over the world and share information with involved parties. As a result, we examined the digital solutions and paid our attention on "blockchain" which is a distributed network technology that enables data sharing among network participants while securing data tampering resistance.- "

Commercial Lines Claims Department, whose target customers are corporations, has overseas subsidiaries and network of agents who are in charge of insurance payment when accidents occurred, and handles the insurance payment from all over the world with their cooperation.
Tokio Marine & Nichido has conducted a PoC utilizing blockchain for the application procedures corresponding to the "entrance" of insurance, together with NTT DATA from 2016 to 2017 and confirmed some positive results. Therefore, this time, we selected NTT DATA as our partner again to apply blockchain to the insurance payment services corresponding to the "exit".
"We see blockchain as one of the key technologies for the future competitive advantage. In this initiative, in order for Japan to hold a certain leadership in the world, we thought it would be a Win-Win cooperation if we work with NTT DATA who has a cooperative relationship with major domestic companies from various industries and has both technological and execution capabilities related to blockchain." Mr. Itabashi emphasizes.

Introduction Flow
The very beginning of this project is “What is blockchain?”

We started the PoC from October 31 2017 and verified the real-time data sharing, the effect of cost reduction and quicker insurance payment by distributing the real data used for insurance payment procedures such as damage report, pictures of damaged cargo, invoice, etc. on blockchain. Data sharing through the blockchain was conducted among Tokio Marine & Nichido(the insurer), overseas claims settling agents and surveyors of 8 countries located in Europe, Americas and Asia. In this PoC, we also conducted a technical verification on a mechanism that can share real-time information of non-text data including pictures of damaged cargo.

Mr. Yuki Haraga, Deputy Manager of Global Cargo Claims Group 2, said, "Generally, blockchain is not good at handling large data such as images. However in this PoC we have confirmed that it is possible to smoothly share large data such as pictures of damaged cargo and survey report among the participants on the blockchain. "
PoC scheme is consolidated under frequent and close discussions with NTT DATA. 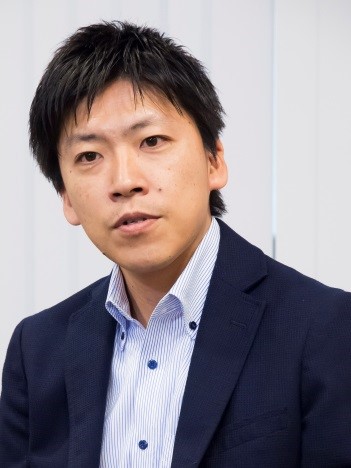 "To be honest, at first we had no idea about blockchain was about, but NTT DATA fully supported us from the technical aspect. Also, since they were also familiar with the complicated operations of marine cargo insurance through the PoC corresponding to the “entrance” we conducted together, we were able to communicate with each other by using our terminologies, and PoC was carried out very smoothly." (Mr. Haraga)


This PoC was conducted in 8 different countries and Mr. Haraga was really surprised that there were no operational issues during the PoC.


“Every time we introduced a new system, it is quite usual to have questions or severe opinions from operators on the operability and convenience for the difference from conventional operations. But this time, we were taken by surprise because the operators had no problem using the system, despite of it having been developed using the new technology of blockchain. ” said Mr. Haraga.


Mr. Itabashi also commented with a smile, “Since we had to build a whole new system from scratch, we consulted with NTT DATA about how we should change our conventional way of thinking and working. When building a new mechanism based on our thinking, it was extremely helpful that not only engineers but also sales representatives from NTT DATA participated in each meeting and we were able to discuss together as one project team. Also, the trend of blockchain technology has been changing rapidly. There was a trend change in blockchain technology during the PoC, but NTT DATA proposed the optimal solutions in a timely manner.”


At the end of the PoC during this summer, we were able to confirm the expected effects from various aspects.


First, for the insured, it was confirmed that operations of documents preparation and submission required for insurance claims would be reduced, and insurance payment would be accelerated.


“As for insurance payment, it was confirmed that the period of payment which could take more than one month would be drastically shortened to about one week. We expect it will bring great benefits for our customers as well.” (Mr. Haraga)

Through this PoC, the effectiveness of applying blockchain technology to the marine cargo insurance claims’ procedures has been confirmed. Tokio Marine & Nichido will continue to team up with NTT DATA working on the remaining issues identified in this PoC and aim to partially put it into practical use in FY 2019.


“Since we were impressed by the rapid emergence of the new blockchain technology through this PoC, we feel confident to have NTT DATA with a wide range of IT expertise as our partner. We also look forward to knowing the latest trends of the blockchain technology and optimal solutions towards the practical use.” Mr. Itabashi said with passion and the future in mind.

In this PoC, we verified if we can promptly distribute, share and utilize the real data used for insurance payment procedures such as damage report, photography of damaged cargo, Invoice and etc. on blockchain among 8 overseas claims settling agents and surveyors located in Europe, Americas and Asia. 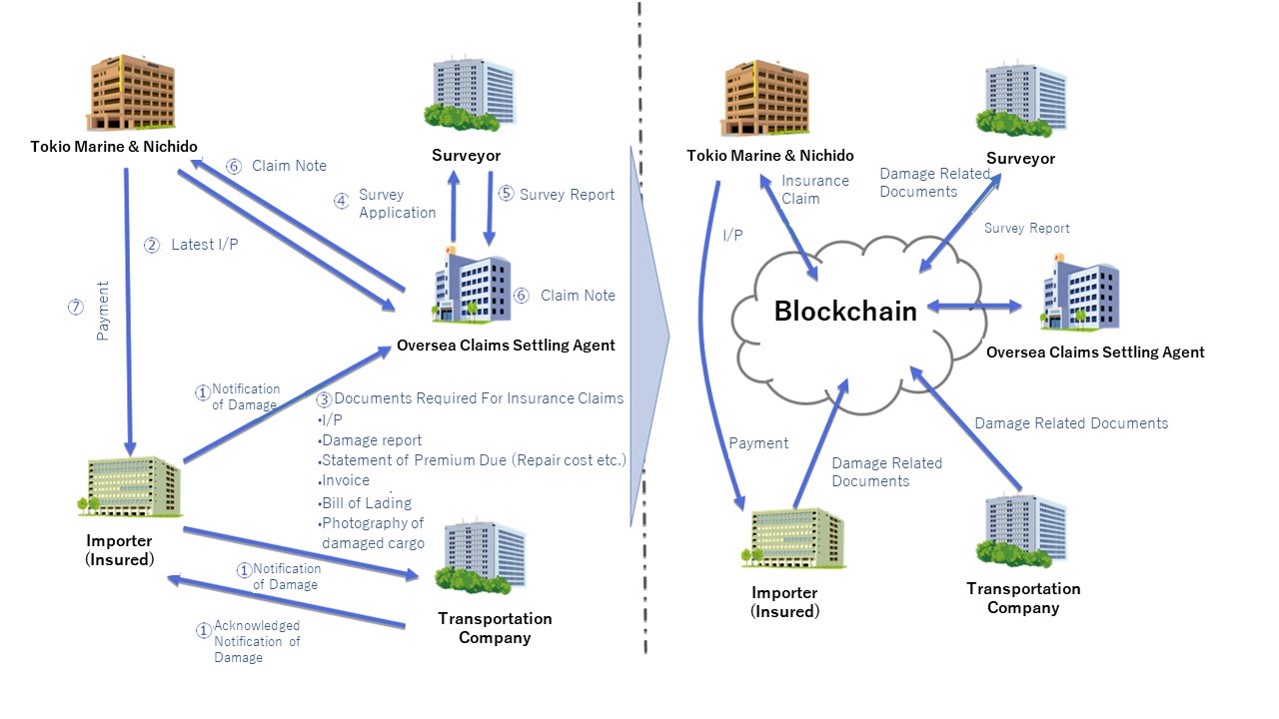 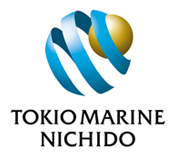