- Rakuten Baseball, Inc. will pioneer use of the system from 2017 season, NTT DATA to market the service on a global basis -

Tokyo, September 14, 2016 - NTT DATA Corporation, a global IT service provider, and Rakuten Baseball, Inc. announced today they will launch a new virtual reality (VR) baseball coaching system in Japan in 2017, and that they subsequently plan to offer the service globally. Developed using NTT DATA’s VR technology, the system uses a database of professional players’ videos and performance statistics to generate high quality simulated video images. Rakuten Baseball, Inc., which manages the Tohoku Rakuten Golden Eagles baseball team, will be the first customer, using the system from the commencement of the 2017 baseball season. This will be the first time a VR baseball coaching system has been developed in collaboration with a professional baseball team.

The new system is targeted at raising the performance levels of professional baseball players, simulating for batters the sensation of standing in a real batter’s box and allowing them to experience virtual pitching scenarios through a head-mounted display.

NTT DATA developed the new service in collaboration with Rakuten Baseball, Inc. based on a solution called “Athlete First-Person Vision Synthesis” which was developed by NTT Media Intelligence Laboratories. It allows players to experience a sense of full realism thanks to the processing and presentation of massive amounts of data sourced from numerous sensors. During the development phase, Rakuten Eagles players participated in trials and verified the practicability and usability of the system, testing pitchers’ characteristics and pitches and the timing of batting responses.

“The Rakuten Eagles are keen to deploy the latest technology in the field of sport, and were happy to participate in these trials. Following their conclusion, we have decided to start using the system next season,” said Akira Ueda, Director of the Baseball Team Strategy Office, Rakuten Baseball, Inc. “We can expect the team to improve on a continuous basis, as the system allows the VR content to be updated as the baseball season progresses.”

Rakuten Eagles player Toshiaki Imae, who participated in the trials, said “The head-mounted display gives players the advantage of being able to practice receiving a variety of pitches. This gives them more confidence, and the readiness to face any game.” 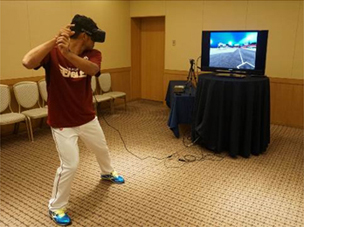 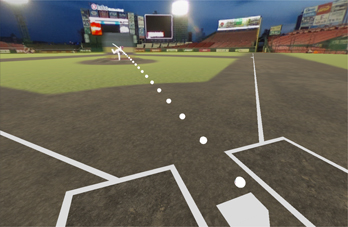 Toshiyuki Hayashida, Head of Life Digital Division at NTT DATA, commented, “There are very few cases where VR technology is used on an ongoing basis for the training of professional athletes. With the collaboration of Rakuten Baseball, Inc., we’ve been able to produce a system whose quality is good enough to develop professional baseball players’ skills throughout the entire season, utilizing data that is constantly updated. We plan to offer the solution globally, in particular to Major League Baseball teams. NTT DATA will leverage its technology to drive this approach across other sports, spearheading a new collaboration between sport and technology.”

Features of the new VR system

The VR baseball coaching system allows the generation of a virtual reality 360-degree 3D baseball field and the projection of pitching images onto the display, providing players with the sensation of standing in a real batter’s box. The system computes vast amounts of pitching data sourced from Rakuten Baseball’s own games, and uses this to generate pitching scenarios. The system takes into account the batter’s position in the batter’s box and their changing head directions when they swing the bat, reproducing a matching three-dimensional trajectory of the ball in their field of vision as it is pitched. The players view these images through their head-mounted display; the high quality of the video images ensures no dizziness or discomfort. They can repeatedly experience the pitching motion and trajectory of balls from the batter’s position, allowing them to train prior to encountering various pitchers, and for the whole team to plan their strategy prior to each game.

Rakuten Baseball, Inc. manages the Tohoku Rakuten Golden Eagles baseball team. The Tohoku Rakuten Golden Eagles were founded as a baseball team in October 2004 and participate in Nippon Professional Baseball’s Pacific League. Their home field is in Miyagi Prefecture in Japan’s Tohoku region. Their home stadium is the Rakuten Kobo Stadium Miyagi, which suffered damage during the Great East Japan Earthquake in 2011. The team won its first Japan championship in 2013. Masahiro Tanaka (now with the New York Yankees) and Hisashi Iwakuma (now with the Seattle Mariners) previously played for the team.

NTT DATA (TOKYO: 9613) is a leading IT services provider and global innovation partner headquartered in Tokyo, with business operations in over 40 countries. Its emphasis is on long-term commitments, combining global reach with local intimacy to provide premier professional services varying from consulting and systems development to outsourcing. For more information, visit www.nttdata.com