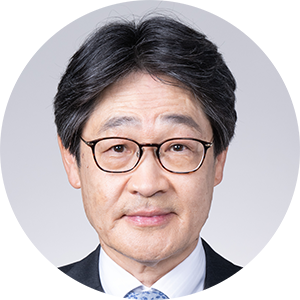 Yo Honma has been the President & Chief Executive Officer, Representative Director since 2018.

He initially joined Nippon Telegraph and Telephone Public Corporation (known then as NTT) in 1980, since then rising through the ranks to become president and Chief Executive Officer of NTT DATA Corporation.
NTT DATA Corporation is now a leading global IT services provider headquartered in Tokyo specializing in consulting, system development, and business IT outsourcing with over 150,000 employees in more than 53 countries worldwide.

Before being named president and CEO in June 2018, Mr. Honma was responsible for the Japan and Asia Region as representative director and senior executive vice president. Before that, he was responsible for the Enterprise IT segment, where he defined clear objectives and significantly improved employee motivation and performance, increasing the segment's operating income by over 50%. Previous positions include heading up the President's Office as well as leading the Public Relations Department.

Mr. Honma also has extensive experience in the financial services sector and made significant contributions to major system development projects in the Japanese financial services sector. This includes work such as on the Zengin Data Telecommunication System, a nationwide online network system for domestic funds transfers covering almost all banks in Japan, and CAFIS, (Credit and Finance Information System), and a Japanese national network infrastructure for credit card transactions.

Since October 2020, he has served as the first Chief Data Officer of the city government of Sakata, Yamagata Prefecture in Japan, aiming to resolve issues facing the city through digitalization.

Mr. Honma holds a bachelor's degree in economics from Tohoku University and has authored "Green Tomato – Key messages for corporate management surviving in the digital era." In this, he shares real-life cases and encourages Japanese business leaders to drive digital transformation.